skip to main | skip to sidebar

Wanda and I took a week off at the beginning of August and did some day trips. We went camping, did a maze through a marsh in a paddle boat, visited the lost villages museum, and the ruins of St. Raphael’s church. 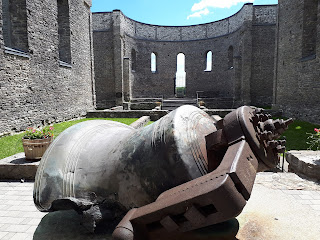 And then my fridge broke and I had to get a new one. Fun fact: large appliances are hard to get due to the pandemic, but I was able to get one in about 10 days.

I made a bunch of masks. 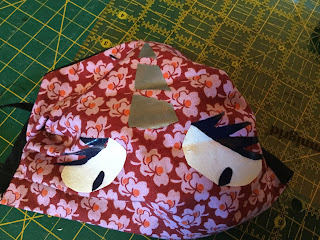 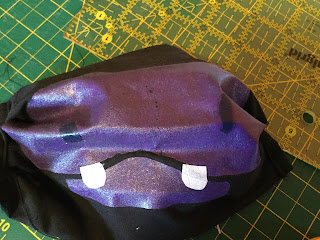 At the start quarantine, I saw some videos about flow painting. Basically, you thin paint and then pour it once canvas. This weekend I tried it.
In the black, white, and red painting, I laid a piece of wool on the canvas and put red, gold, and white paint on the wool. Then I filled in the rest of the canvas with black and then pulled the wool off. 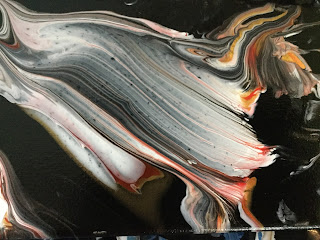 The next painting was a dirty cup - you put the paint into the cup in layers, then tip the cup upside down onto the canvas and tip the canvas to help the paint spread. 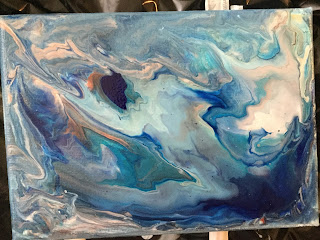 The next one has the same colours as the dirty cup pour, but instead of dumping the cup upside down, I poured it out while making small circles with my hand. Again, I tilted the canvas to spread the paint. I like the lines that result from this pour. 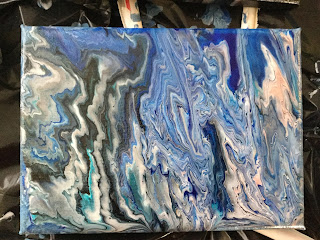 Posted by Colette at 3:36 PM No comments:

I’ve done a fair amount of online shopping for years, but the pandemic has stepped up the variety of places I've shopped. Some are great; some are good; and some are terrible.

Best Buy - not my purchase, but my mom ordered (and paid for) an iPad early in the pandemic. It did not arrive, as clearly showed by the tracking number, but Best Buy has not refunded her. It's now at a credit card dispute.

IKEA - I ordered a coffee press on April 4. A couple of weeks later I contacted them to ask when they expected it to ship. The rep I was talking to said it had shipped. A month after I placed the order, it still hadn't shipped according to their site and customer service was no longer reachable. I asked them for a refund on Twitter, which also didn't arrive. Another credit card dispute. (Curbside pickup was all but non-existent here last time I looked, and the line to get in is huge. Moral of the story: no IKEA for the foreseeable future, don't even look.)

Rona - in-store pickups take a couple of weeks last time I tried, but online orders ship quickly. I ordered a desk from them (time to stop working at the kitchen table) and it shipped within a couple of days. Unfortunately, Purolator took a couple of weeks to get it here, but that's on them, not Rona.

Cabelas - Ordered coffee press #2 from here. They were good about telling me when it would ship, and meeting the date. Unfortunately, UPS took longer than expected to get it here; not Cabela's fault, though.

Amazon - back during the coffee press saga, they were forecasting a month for 2-day delivery. That seems to have fixed itself, though. (Although I have now cancelled Prime so I don't buy from them as often.)

Costco - They forecast a couple of weeks for an order, and meet or beat their estimates.

Staples - I ordered a monitor, keyboard/mouse, power bar, headset, and paper on Monday night; by Wednesday night I had everything except the headset, which is projected to be here on Monday.

Walmart - again, ordered some shirts and a set of shelves on a Monday and had everything by Thursday.

Indigo - ordered some books on Tuesday, had them by Thursday.

A couple of weeks after we painted the living room, I painted the upstairs bathroom. I love the new look, particularly because I took down the blinds and put that film on the windows that keeps people from being able to see in. It’s so bright! 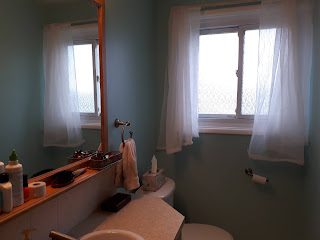 I bought a new TV, and Wanda and I mounted it from the ceiling. 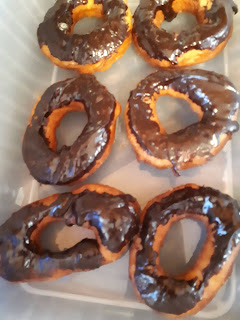 I built a hammock stand. 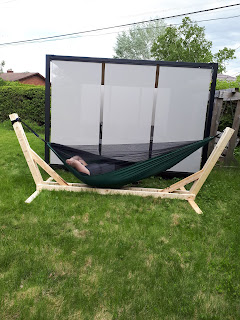 And I made a quilt for a friend who is pregnant. It turned out well and definitely ended up differently than it would have if fabric stores were easily accessible. (They’re open; I’m not going.) 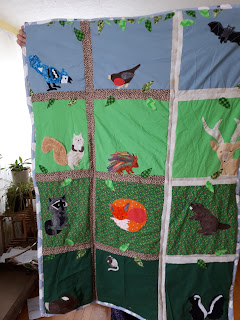 And I made a fundraising escape room that is open to the public: https://girlguidestravel.wixsite.com/website/laurasecord

Next is probably building a proper work area - I’d like to buy the desk, but it is in short supply so I might have to build it.
Posted by Colette at 6:37 PM 1 comment: 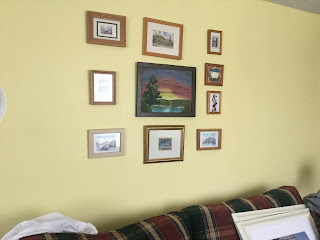 Last weekend was the long weekend, and Wanda and I painted the living room/dining room/hallway - 11 walls, 9 doors, and 4 windows.

Now it’s done, which is amazing.

While we were painting, we ate outside in the pergola I bought last year, and we’ve kept doing that. It’s so nice to be able to sit comfortably outside to eat. I’ve used the fire table as a fire-free table all week, and it works great!

In other news, the coffee press from Cabela’s finally arrived. The IKEA refund did not, so now I have to follow up on that.

When we started painting, it was spring; for the last week, the weather has been summer. It’s lovely.

My other project this week was finishing up an online escape room fundraiser for my travel group, and that’s finally done. As part of that, I pulled out a bedspread my grandmother made for a picture. I always loved it, but have never actually used it, but now it’s on my bed. 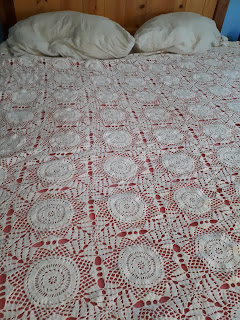 Posted by Colette at 8:59 PM No comments:

I miss being able to get stuff

On April 4, Wanda dropped and broke the coffee press. I went on to Amazon, discovered that they weren’t shipping for a month, then ordered on from IKEA. They charged me immediately.

A couple weeks later I contacted them and asked how delayed they expected it to be. The person I chatted with told me it was being shipped that day.

A week after that, I ordered coffee press #2 from Cabela’s. It was supposed to arrive May 6.

In the meantime, I tried to contact IKEA again, but neither chat nor phone support was available for days. I finally tweeted at them and got them to cancel my order (and supposedly refund it, but that hasn’t happened yet.)

I also put a coffee press in my next grocery order. (It was out of stock, so no luck there.)

May 6 came and went, with no coffee press. It appears that it’s lost in the mail, since it hasn’t moved since Tuesday.

Friday I ordered a coffee press for pickup. I got it today. (Canadian Tire came through!)

(The Amazon one would have been faster.)
Posted by Colette at 7:49 PM 1 comment:

Easter was weird. No Easter Vigil, no colouring eggs (we could have but didn’t bother), no guests for the big meal.

We did have a family zoom call, which was fun. And the weather was nice.

This past week I hit a point where I’d had enough. I was tired of having to plan ahead, and of not seeing people, and I just wanted to go back to normal. Luckily, a day or so later, that passed.

I’ve been playing online board games with family and friends on the weekends. We start a zoom call and then go onto boardgamearena.com. We can talk and play at the same time. It’s not the same as being in the same room, but it’s pretty close. I bought the premium membership (which came to $37 CDN) which allows me and Wanda to play at the same time, and also allows us to play all of the games. Well worth it.
Posted by Colette at 5:31 PM No comments:

I’m still here, and all is well with us.

I haven’t run out of projects, but I’ve run out of quick wins. My free time this past week has been spent trying to figure out how to move our escape room fundraisers online. (Not there yet, but I’m making progress!)

I went for a walk with a friend yesterday, which was nice even though we had to walk 6 feet apart. Today it rained, so I stayed inside.

The snow is melting, which is nice. Soon I’ll be able to sit outside by the fire table. (For 30 seconds, until I get cold. Still, summer is coming.)
Posted by Colette at 8:23 PM No comments:

Colette
Ottawa, Ontario, Canada
This blog started in 2008 when I did one new thing every day. Now I write about new things I've done, as well as pretty much anything else I feel like talking about.

Other blogs I enjoy

Have Time To Kill?